Most of my weekends are spent judging high school and junior high surf contests. This weekend was spent on the other end of the spectrum; I was surfing in a contest. Surf Ride and Vans have put together an awesome pro/am event that has about $5,000 dollars at stake! Although I didn't win the contest, I did give it a heck of a shot with a few solid maneuvers that impressed the judges.

After squeaking through my first heat I looked at my next heat draw and was surprised. It looked like a semi final in a 1 or 2 star WQS event! With that in mind, I knew I had to go for broke. It was all or nothing. When I was in the water in my round two heat I found a few sections that had some scoring potential. I put my head down and smashed 'em. On one wave I was able to blow the fins and the other I just kept spinning which ended in a pretty gnarly reverse. The judges rewarded my efforts and I advanced on to the quarter finals. I tried to surf as well in my next heat but was held back by deteriorating conditions and poor wave selection on my part.

The 2010 Freedom Surf Series presented by Surf Ride and Vans also offers $10K to the overall winner of the pro/am. The contests will be held every month or two, so stay tuned for the next attempt at a $5,000 dollar check!

HERE IS A VIDEO FROM THE LAST COMP. I HAVE A FEW CLIPS IN IT!

Posted by John Daniels at 2:19 PM No comments:

Having glanced outside during the last big storm I was surprised. Almost everyday I awoke to horrible south wind but, today was different, the wind had switched to "side-offshore". With the good winds blowing I better get my butt in the water asap. I grabbed my board, wetsuit, towel, and some wax then called my filmer friend Guto. Once the truck started, I was off to Swamis to battle the 15mph off-shore's. This is the footage that we used for a promo video!

Posted by John Daniels at 4:35 PM No comments: 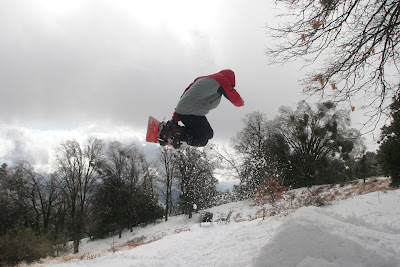 My wife, friends and I have been taking advantage of the great winter weather we've been blessed with over the passed few days. The first day we went up to Palomar Mountain and built a 4 foot kicker. The next adventure was off to Mountain High. They had more snow than I'd ever seen before.
Posted by John Daniels at 11:58 AM No comments: