I was at the pier just doing my thing. After a few tubes I began to wonder if anyone was shooting. I look up at the first outcropping and Bryce Bradford is hanging off shooting away. This kid puts in lots of hours behind the lens and it pays off. Check out these pics and others of his! http://www.flickr.com/photos/brb_photography/

Setting up for the cavern!

Looking ahead for the exit to the second section!
Posted by John Daniels at 7:44 PM No comments:

Yosemite is like no other place on earth. It's home to Yosemite Falls, the tallest waterfall in the United States and has a vertical drop of 2,425 feet. In addition, Yose is home to El Capitan, or "El Cap", a 3,000-foot vertical granite monolith, the world's proving ground for rock climbers.

I remember taking my first trip to Yosemite with my neighbor Patrick. His aunt Mary drove us 8hrs to a hotel right outside of the park entrance. The next day we awoke with tons of excitement, waiting to catch our first glimpse of the huge pine trees and massive rock walls surrounding the valley like a fortress. If you've ever been, you know about the tunnel. Everyone who enters the park must go through the tunnel. When you are coming out into the valley, it's like entering another universe. The valley has a beautiful natural and untouched look. There are very few building and roads. If you want to get even closer to gods creation take a short walk on one of the nearby trails. While on the trail you are bound to see some kind of wildlife. On my second trip to Yose in 2008 we experienced 10 different bear encounters.

My Spring 2010 trip with Nate knapp was a blast. It's a mandatory trip for young adults. The wilderness is calming and rejuvenating. The lack of amenities toughens you up. Your mind set changes when there is no other person to rely on, but ones self. If something goes wrong, it's imperative that one must have faith in himself to get out of the situation. Most of our daily lives are pretty safe. If we get cold we turn on a heater. When you're in the wilderness and are wearing everything you brought to keep warm and you're still freezing, then there's a problem. Out here we learn to survive and adapt. It is a moment of heighten awareness. Hanging on the side of Half Dome thousands of feet from the valley floor by a 1/2 inch cable make us very aware of our every move. One small mistake can be fatal. Feeling superior at work or at school is common, but when your here, high on the peaks of Yosemite, you feel small, very small. 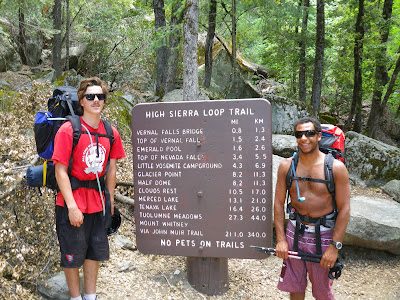 This was the start to our 22 mile round-trip backpack adventure. Nate's first backpacking trip. He had no idea what to expect. Shortly after this photo was taken we were into some heavy mist (more like rain) from the Mist Trail as we were following the Merced River up hill for a few thousand feet. Hiking the mist trail in august may not feel warm and dry, June maybe the total opposite, a full on down poor. 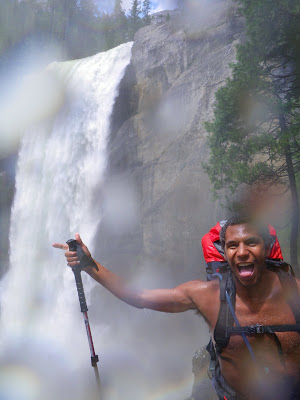 Me Standing in the spray path of Vernal Falls. Pure Yosemite beauty. Several people get swept off of these water falls. Just upstream is a pretty little emerald pool to swim in. Not a good idea! 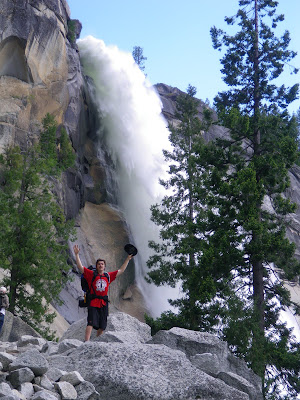 Nate feeling the power of Nevada Falls. This landscape is highly photographed. It's a wonderful display of beauty and power. Thousands of gallons of water are being shot off this rock ledge all day and night long. It takes months for the water to slow down. Hard to believe a drought is possible. 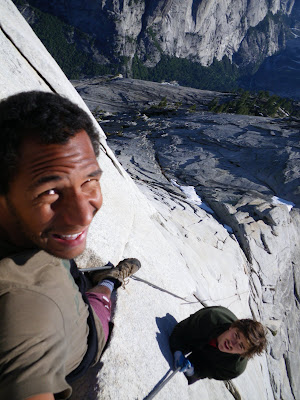 Going up! We are 1/3 of the way up and found a place to rest and calm our nerves. once you commit to the climb up your blood really gets pumping. We are wearing gloves with sticky rubber palms for good grip. I forgot to mention that the park service said not to climb HD because the cables were down. The cables were still connected so, we went for it. I thought it felt safer to have the cables low and weighted to the ground rather than high and wobbly. 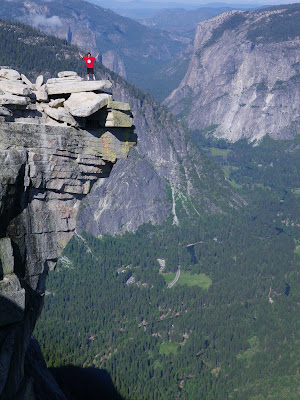 Nate 8,800 ft. above sea level. If you fall off the edge here there's no bouncing and rolling to the bottom. The drop is 4,000 ft. straight down to your death. This is a photo few are willing to be in. Reaching the summit is exciting, but you're not done until you reach the bottom. It was an amazing day and a experience that will last us a lifetime. 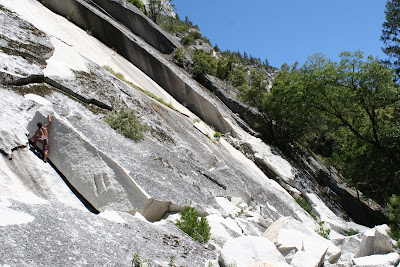 A fun little climb we found off the beaten near Mirror Lake. 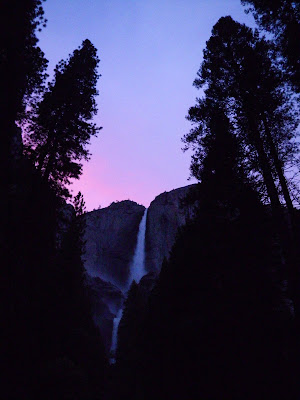 Yosemite Falls. One evening out for a little stroll. Very nice sunset just above the sleeping giant.
Posted by John Daniels at 1:41 PM 1 comment:

JOSHUA TREE is a must! 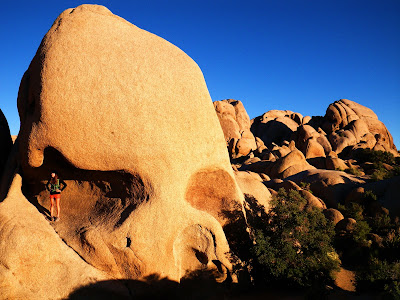 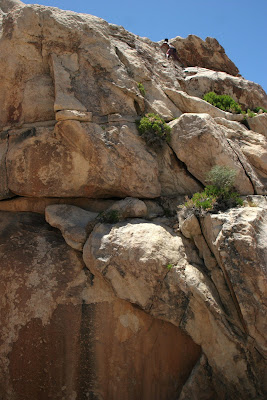 Just went for a little free solo. I felt very exposed even though the rock doesn't look steep or tall. 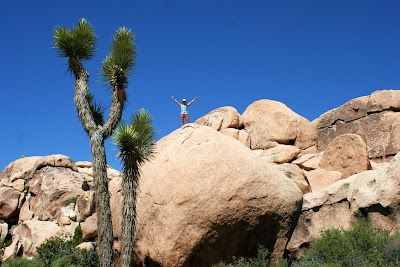 We had to climb though a cave to get on top of this high ball. 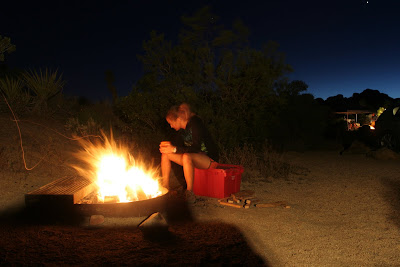 Night time is amazing in the desert. There is no better place on earth for star gazing. 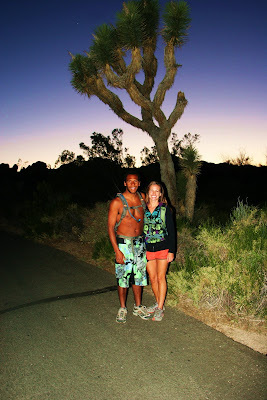 Joshua Trees grow taller than you think they would.
Posted by John Daniels at 4:05 PM 1 comment: