Growing up around the ocean has afforded me the opportunity to explore the underwater world. It's a beautiful place, but at the same time can be very deadly. Our bodies are only made to withstand a few minutes with out oxygen. There is one man that has been pushing the envelope. Here is a video of the half fish/half man!!!

Exhausting Night:
The spring break crowd in J-Tree was in full effect. We left the house around 7:30 pm and got there around 9:30 pm. Every campsite was overflowing with people. We drove around for two hours and to at least three different campgrounds with no luck. We finally found a spot that was paid for, but was not occupied at the time. I looked at my watch and saw that it was closing in on midnight. I had to make the decision to camp here. Cameron, Jenny, and I threw our bags down on a tarp, snuggled in, and crashed. 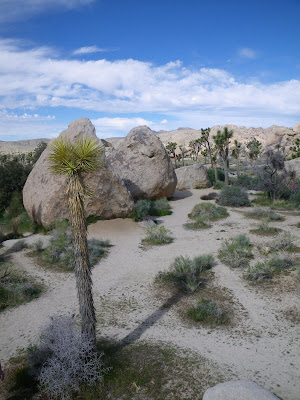 Awesome morning:
I awoke to a beautiful sunrise and crawled out of my bag to get a better look. I spent twenty minutes sitting on top of a huge rock like an eagle, watching the sun and people rise around the campground. It was an amazing sight. Soon after the sun came up we sat down for breakfast. Jenny and I each had a granola bar and a banana. Cameron on the other hand decided to take down 8 slices of Angel food cake. It was a priceless sight. Don't worry it didn't end there. The next victim was a bag of jalapeno chips and nacho cheese. That didn't last long. Cameron decided it was too early for the chips and cheese and gave up.

Day 1 Climbing:
Our first day was filled with adventure. We went to Hall of Horrors where Cameron put up the first climb. It was a tricky friction climb on small holds. House Of The Homeless 5.9. Once I got up there on TR to inspect, I was astonished with what Cameron climbed. I had to take a minute to look around for holds, it was slim pickings up there. Jenny did a great job following and then decided to pack up and try some Trad climbing. We all needed to practice our placements before we took on the bong 5.5 at the end of the day. Quail Springs was our training ground. We tackled a fun 5.4 called Eschar. 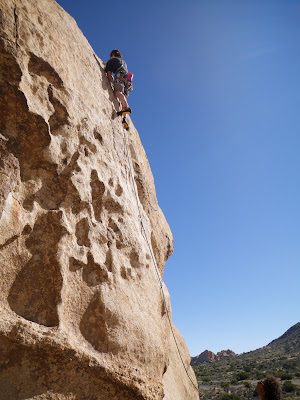 Cameron flashing House Of The Homeless 5.9. 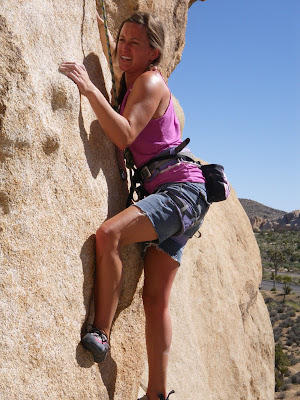 My beautiful wife getting a tan while looking for decent holds. 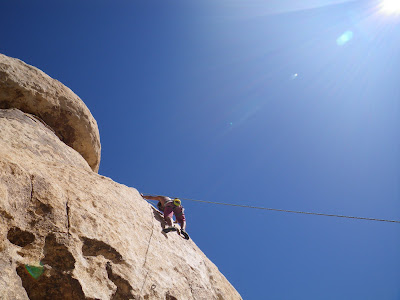 Building up the courage to make the move. 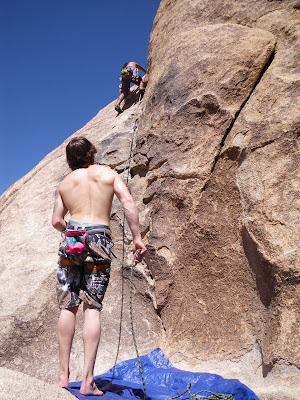 First Trad lead of the trip on Eschar 5.4 at Quail Springs.

The Scare:
By this time, we had been out in the 85 Degree heat for a while. My wife was really starting to feel it. I had her drink Gatorade and water fast. We decided to go back to camp and rest. Jenny's symptoms worsened and she began to vomit. I was now getting a bit worried. I once was also a victim of heat exhaustion. I knew the symptoms first hand and how bad the situation could get if not treated . Cameron and I put a sleeping pad for her in the shade and watched over her, having her drink occasionally. A nice long nap was much needed. Jenny woke-up feeling much better.
We decided to head over to Hidden Valley Campground to try the Bong. I got all racked up and went for it. Cameron and Jenny both followed flawlessly. It was an amazing ending to the day. The Bong 5.5 was finished! 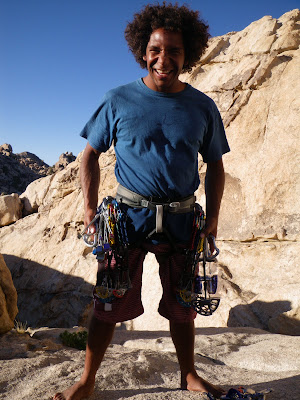 Racked and Ready for the Bong. 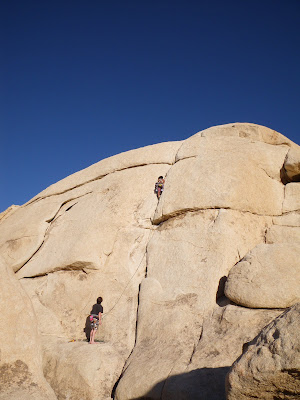 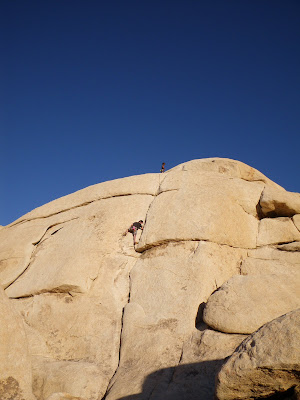 Cameron finishing the crux move over the roof.

Wild Night:
We left HVC and went back to camp beat. We started a fire, relaxed, hydrated and told stories for a few hours. Before you knew it the rest of the crew was pouring in. I fired up the dogs on the grill and welcomed Taylor, Jessica, Jon L., Jon N., Garrett, and Chance. We were all having a blast with full belly's and smiling faces. Around midnight we had to call it a night. There were climbs to crush in the morning. 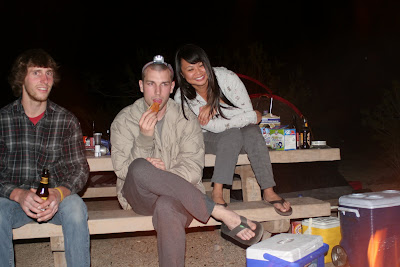 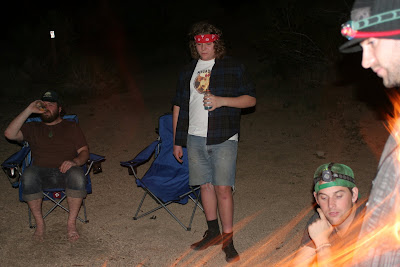 Jon, Jon, Garrett and Chance mesmerized by the fire. 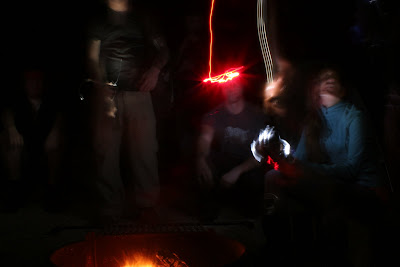 Go Time, Day Two:
The morning came fast and some were definitely wishing they got to bed a bit earlier last night. Breakfast burritos were next on the agenda. Todd and Lynn showed up during breakfast. While everyone was eating, Taylor and I planned out the day. First stop was bouldering at the Real Hidden Valley. Every one put in good work there. It was the strongest I had seen Cameron climb! All of his late nights at Vital finally paid off. We worked; Turnbuckle Slab V-Easy, Turnbuckle V1, Block Party V3, So High V5R. Next on the list was a climb around the corner or Atlantis Wall. Both were packed. Our next plan of attack was Echo Cove. 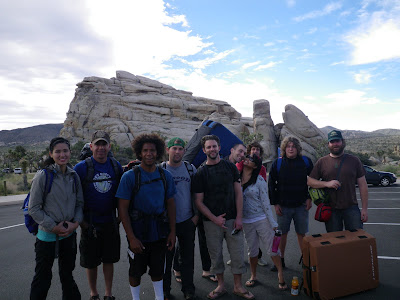 The Crew minus my talented wife behind the camera. 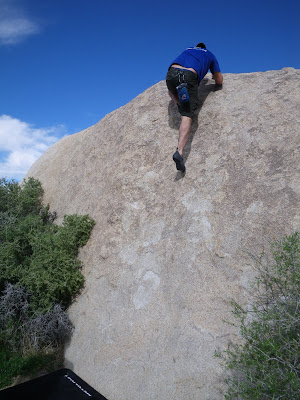 Todd getting the first onsight ascent of the turnbuckle slab V-easy. 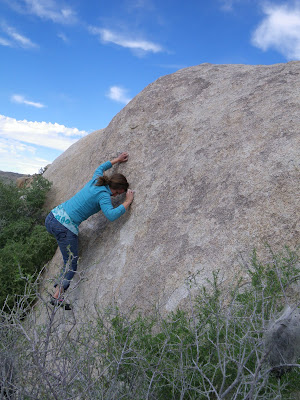 Jenny warming up on the Turnbuckle.

Crushing the cove:
This was the chance for me to push my Trad skills on a steeper face. I felt my Trad limit was in the 5.6-5.7 range, but Taylor thought I could pull off Fun Stuff 5.8. The climb was a bit intimidating at first. It had a rough start. I had to climb really small holds and almost no feet over a bulge about 12ft off the ground. It really wasn't too bad. I went into this climb thinking this was the crux move and later found it wasn't. I had good placements and jugs 80 percent of the way up. The very top was a bit runout for the move I had to make. I felt around for a minute and found a bad seam for my right hand. I knew this was it and had to commit. I did look down to see where my last piece of PRO was and it was 6-8 ft. away. If I came unstuck I would be fine, but it was a 12-16ft. ride I didn't want to take. I felt strong and confident and went for it. SUCCESS! I was super psyched to finish the climb. It was right at my level and tons of fun. Cameron, Jenny, and Todd just flew right up it. Lynn and Jon N. also made it look way too easy. 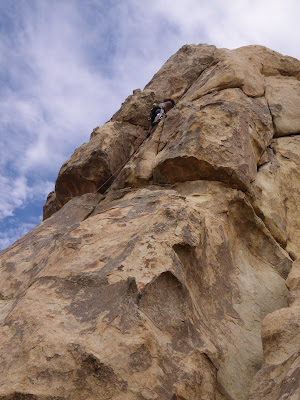 Placing gear in the crack on Fun Stuff 5.8. 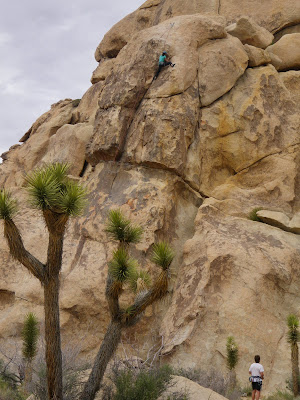 Lynn meeting up with the crux.

Bring the Heat:
From the moment we arrived on Thursday night I knew something big was coming. Everyone on the trip was having a blast pushing their limits. When Taylor shows up, you know its on! I've seen him pour out his heart and soul into pushing hard climbs. He's accomplished climbing feats that most only dream of. This was the time and place for him to shine. There was a beautiful overhanging sport climb calling his name. Ground up or Shut up 5.11b was the challenge. I was praying for him to get an onsight. When he left the ground and powered through the bouldery start, I knew it was going to be close to his limit. He looked strong, clipping a few bolts low and putting a few pieces of PRO in the middle section. The next part looked ridiculous, slightly overhanging with really tiny holds. If you make it past two bolts, its a crimp fest which leads to a dyno to the top. Taylor made a few moves and ran out of holds missing his onsight. I was bummed for him, but the climb was not over by any means. He backed down and found the missing hold. Now its full-steam-ahead, clipping and crimping . At the last bolt it was liftoff, I held on tight to the rope waiting for the tension from his fall. There was no fall. I looked up and saw him holding on with one hand. He nailed it and pulled himself over the top. I was amazed. I jumped on the route on TR, made 3/4 of it clean. I was stopped and puzzled by the middle section. I had to go off route and back on to the right. I then threw for the top and couldn't stick the dyno. I was gassed and had to give up. I never give up. I just sat there in amazement at what Taylor had accomplished. 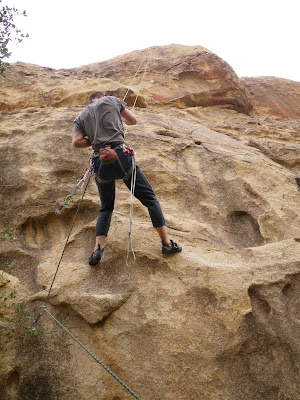 Taylor cleaning his gear after the ascent. A good look at the steep face! 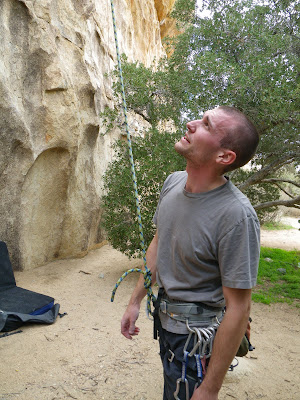 Thinking about the send of Ground up or shut up 5.11b. 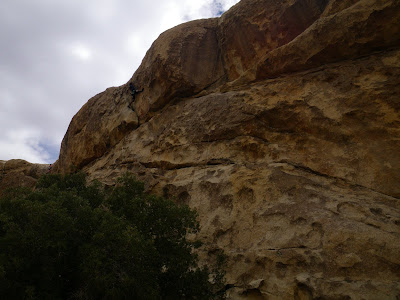 Traversing right back onto the face for more pain....

You can find more park and route info at: http://www.mountainproject.com/v/california/joshua_tree_national_park/105720495
Posted by John Daniels at 11:50 AM 2 comments: