Wow, what an awesome day at Big Rock. Upon arrival I went searching for a sport boulder I had heard about on MountainProject.com . When we found the rock it look really good. Great friction, features, and holds. I wanted the new guys to get the first shot at it, so Rex hopped on Kissed by the Sun 5.8 . Jon Went for the second attempt and had a tough time leading it. He came down and worked a route on TR that I sent. It was Praise the Rays 5.8 . After he figured out the crux moves it was smooth sailing to the top. After we all got a climb in on the Helios boulder we moved over to the main wall. Rex and I went for a multi-pitch climb while Jon produced some epic photographs. 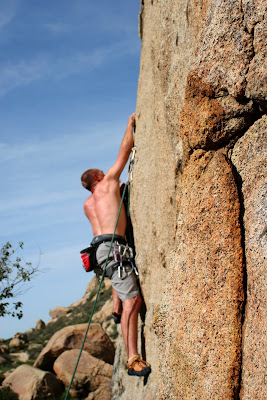 Rex looking for something to grab on a bald face. There are very few holds on the lower portion of this climb. 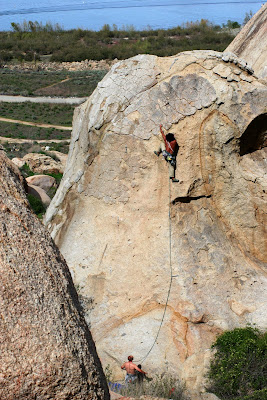 Praise the Rays had a challenging crux move over the bulge. I had to pull off a balancing act with bad smears and small crimps. 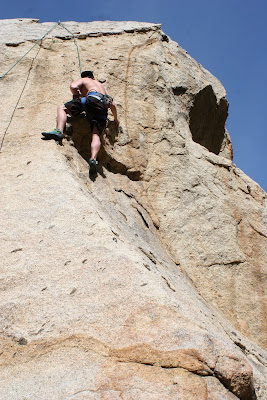 Jon pushing over the crux. 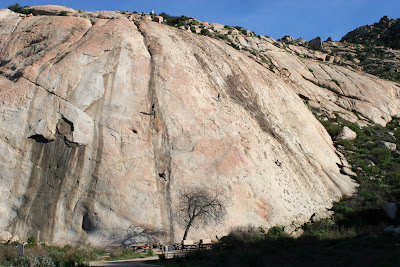 This is a shot of Rex and me straight up the Trough 5.5 . All the water water streaks made for a slippery climb. To the left is my friend Marcio from Brazil, belaying up his friend Nate. 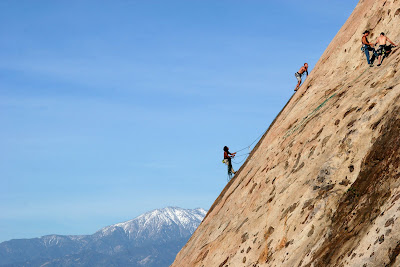 The four of us psyched to be he high in the sky.
Posted by John Daniels at 5:33 PM